Win a Free Vacation! Enter for a chance to win!

Cambridge Bay is located on the southeast coast of Victoria Island in the Region of Nunavut, Canada. The natives named the area Ikalultuutiak meaning “good fishing place.” The area has long been inhabited by Paleo-Eskimos who hunted caribou and seals in 1800 BCE. 500 years ago, the modern Inuit have populated present day Alaska.  In 1839 when the town was first visited by Europeans, the area has since been renamed honoring Prince Adolphus, Duke I of Cambridge. By the 1920’s trade became rampant and settlements slowly developed welcoming the Anglican & Roman Catholic missionaries that built schools and municipals soon after.

Dundas Harbour is a quiet harbor on Devon Island where hawks nest, muskoxen graze and walrus can be spotted just off shore. This abandoned Qikiqtaaluk settlement in Nunavut was first established in 1924 as an outpost to curb foreign whaling, and the ruins of a few buildings remain along with one of the northernmost cemeteries in the world.

Beechey Island is located in the Canadian Arctic Archipelago of Nanavut, Canada. It is known for the Franklin Expedition in 1845 and the search for the Northwest Passage, and was declared a Territorial Historic Site.

Davis Strait is between Nunavut's Baffin Island and Greenland that connect the Arctic Ocean with the Atlantic. The icy habitat of Davis Strait is an ideal home for globally important populations of bowhead whales, narwhals, fish, seabirds and cold water corals.

These waters are also know for their fisheries, and visitor will see the Inuit residents that have been fishing here for thousands of years.

Ilulissat means icebergs in Greenlandic, and the town has a beautiful location at the mouth of an ice fjord that is filled with enormous icebergs, and is the most productive glacier in the northern hemisphere. North of Ilulissat lies the settlement of Oqaatsut/Rodebay, where some of the old buildings from colonial times are today restaurants or huts available for rent. Ilulissat is a modern town but is also know as the dogsled town for all its sleds and snow dogs, and visitors can share in the sledding fun.

Sisimuit is a growing town located in western Greenland. It is one of the main village destinations in Greenland, and an administrative center for the Qeqqata Municipality. The population of Sisimiut was recorded of 5,598 inhabitants living in the town in 2013. One of the main attractions is the multicolor Northern Lights of the Aurora Borelis that take place during the months of September to April. Aside from this amazing phenomenon, many visitors come to Sisimuit to enjoy activities such as fishing, hiking, and dog sledding.

Nuuk was founded by the unfailingly optimistic Hans Egede - the Danish missionary with soul-conversions on his mind - who promptly named the settlement Good Hope. Today Nuuk is small by modern standards, with a total population of only 14,000. Despite a wealth of land and a paucity of people, Nuuk has insisted on housing the population in immense apartment blocks with imaginative names like Blok P - a kind of Gulag on ice - and the urban sprawl is now spreading out along the road to the airport. Kolonihavnen is a pleasant exception to the rest of Nuuk's Lego-city look: it's a picturesque 18th-century fishing village in the heart of Nuuk and gives some idea of what the town looked like before the industrial harbour was built. Nuuk's real attraction lies in its proximity to any number of excellent day hikes into the hinterland and the fabulous views from the tops of the nearby mountains. Organised tours, boat trips and the rental of equipment is easier from the capital.

The City of Corner Brook - in Canada's Newfoundland and Labrador province - is nestled among the Long Range Mountains, which are a continuation of the Appalachian Mountain belt, stretching up from Georgia in the southern United States. Theatre and art are alive in Corner Brook. Corner Brook is Newfoundland and Labrador's "Host City" and is ideally positioned to host major sporting events. Experience picturesquesque Corner Brook from many groomed walking trails or visit the Captain James Cook Monument and bask in the glory of the sun setting over the Bay of Islands. Step back in time at the Corner Brook Museum and Archives or the Railway Society of Newfoundland Historic Train Site. Explore the downtown area and discover unique gifts and crafts and dine out in one of the City's many fine restaurants. Take a scenic drive along the coast of the Bay of Islands or have a more extreme adventure in Gros Morne National Park, just one hour away.

Halifax is Atlantic Canada’s center of business, research and education. Strong emphasis is placed on cultural diversity, historic restorations and the preservation of heritage and culture. The Halifax Citadel Fortress dominates downtown Halifax. Take a stroll along the waterfront past restored buildings and warehouses of Historic Properties, or a walk in delightful Public Gardens, the oldest Victorian gardens in North America. Halifax’s sister city of Dartmouth lies on the opposite shore and is reached via the oldest saltwater ferry in North America. The spectacular view of Halifax harbor makes the trip worthwhile. Housed in former Dominion Building, the Art Gallery of Nova Scotia features Nova Scotia folk art and maritime artists. A two-hour walk will easily show you the major highlights of historic and scenic Halifax. Visit Historic Properties, St. Paul’s Church and Province House, the latter two being the oldest buildings in the city. Granite Springs is rated one of the finest 18-hole golf courses in Atlantic Canada. 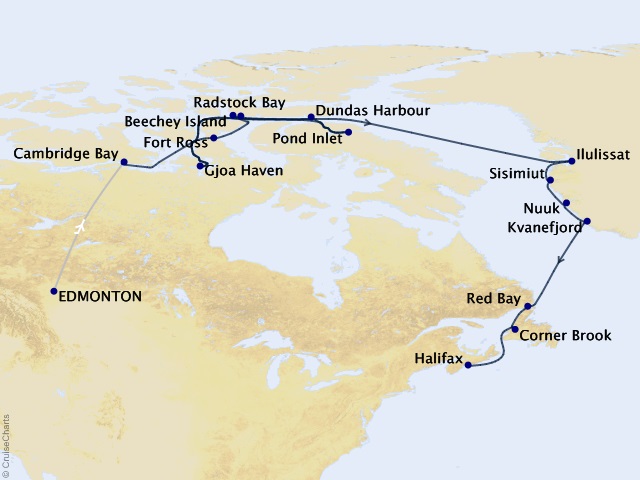 Itinerary subject to change without notice. Please confirm itinerary at time of booking.

Included in Your Expedition

All rates are per person, based on double occupancy, valid for North American residents only and are subject to availability and change without notice and voyage only. The ship departure date determines the price of your voyage. Not all cabin grades ar

All prices per person and in USD unless otherwise stated.

Reference this number when contacting our agency so we may better serve you. Also keeping this number handy will allow you to locate this document again quickly.

Information and pricing is subject to change without notice. While we do our very best to ensure that information and pricing appearing in this website is complete and accurate, we cannot be responsible for incomplete and inaccurate representations, which may or may not be under our control. In the event of a pricing error, misrepresentation or omission, we reserve the right to adjust the pricing or make any other corrections.