Win a Free Vacation! Enter for a chance to win!

12-night Zanzibar and the Jewels of the Indian Ocean Cruise

*Promotion is subject to availability, may not be combinable with certain fares or other amenity offers, is capacity controlled and may be withdrawn at any time. Other restrictions apply.

For many centuries, traders from Europe, India, the Orient and Arabia were lured to these shores. It was from here explorer David Livingstone set off on his last expedition into the heart of the continent. Today, as you walk along the winding streets of the old Stone Town, lined with whitewashed coral rag houses, you can see reminders of this rich history all around you. Visit the Palace museum, former residence of the Omani Sultans, and the cathedral that now stands on the site of the notorious slave market.

Assumption Island is a small island north of Madagascar and part of the country of Seychelles. Walking around the island travellers will discover birds and a beautiful array of island wildlife. Snorkelers are encouraged to set out for the reef close to shore. The waters here are excellent and calm, with perfect visibility. Divers will also discover a wide range of corals and exotic sea life.

Astove Island is an atoll that is part of the Aldabra Group of the Seychelles. It is a raised coral island enclosed by a shallow lagoon. Astove is Portuguese for As Doze Ilhas which means 'The Twelve Islands.' It was founded in 1878 however there were no residents on the island. In 1901, five workers were left on Astove and for almost a decade small farms of pumpkins, watermelons, maize, and tobacco were cultivated. Bat droppings or 'guano' were discovered and extracted. After this discovery was made in 1960, more than 72,000 tons of guano were extracted preserving at least 5,000 tons.

The island is usually visited by scientists, fishermen, and diving enthusiasts but visitors are more than welcome to explore the lagoon, snorkel the coral reefs, and hike through the trails of the coconut palms that unveils an amazing view of paradise.

Desroches is the largest of the Amirantes archipelago of Seychelles. Its huge lagoon provides excellent diving conditions and is known for the Desroches Drop, a favorite among experienced divers. The island is one of the most economically developed of the Amirantes having both timber and coconut plantations. Visitors to the island also experience the richness of the flora and fauna surrounding this spectacular island.

La Digue is a delightful island oozing with refreshing old world charm. Transportation by bicycles and ox-carts preserves peace and tranquility. For nature lovers, the gigantic granite boulders or the near extinct Black Paradise Flycatcher is reason enough to explore this fascinating island.

Victoria on Mahé is one of the smallest capital cities in the world, and the only major port in the Seychelles. It's also the only town in the country - every other settlement is a village. The courthouse and main post office have been untouched since colonial times, but rebuilt streets emanating from the center give the town a clean and modern look. The Natural History Museum in the center of town houses an eclectic collection with bones of the extinct Seychelles crocodile, giant robber crabs, dried out fish, a deformed piglet in a jar and lots of glassy-eyed stuffed animals. Other displays include the wreckage of a ship which came to grief off the Amiranteds in 1570 and a display of gris gris artefacts. For history of the country's people, visit the National History Museum or the Seychelles People's United Party Museum, which celebrates the history of the party.
Victoria's Botanical Gardens are highly recommended for short and shady walks among a variety of native and introduced trees. Within the gardens is a cafeteria, a pen of giant tortoises and an orchid garden. 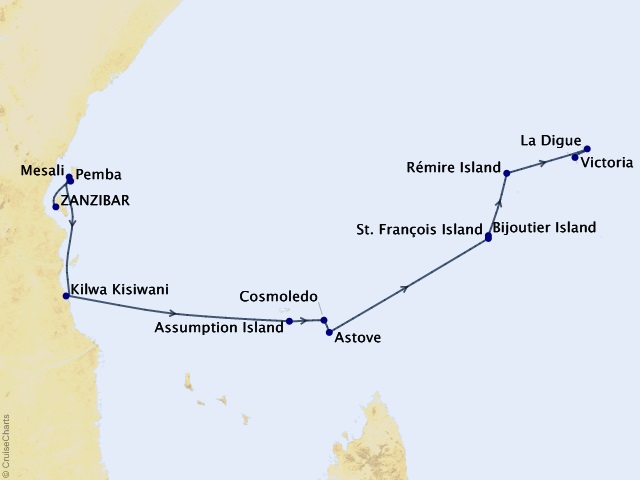 Itinerary subject to change without notice. Please confirm itinerary at time of booking.

Departure Date:
12/28/2021
Number of Nights
12
Cruise Inclusions:
Remarks:
Fares listed are per person, based on double occupancy, unless otherwise noted.

All fares are quoted in US Dollars.

All prices per person and in USD unless otherwise stated.
Offer ID:
1412314

Reference this number when contacting our agency so we may better serve you. Also keeping this number handy will allow you to locate this document again quickly.

Information and pricing is subject to change without notice. While we do our very best to ensure that information and pricing appearing in this website is complete and accurate, we cannot be responsible for incomplete and inaccurate representations, which may or may not be under our control. In the event of a pricing error, misrepresentation or omission, we reserve the right to adjust the pricing or make any other corrections.